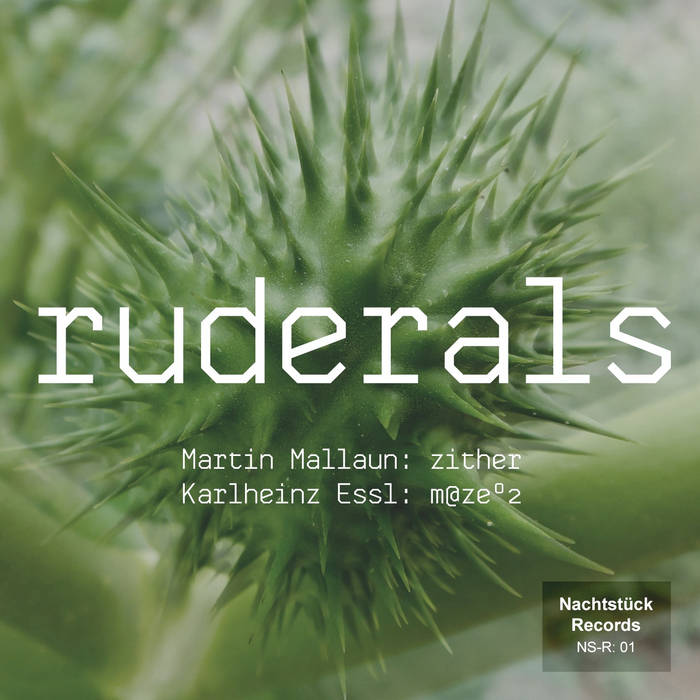 Nachtstück Records is a new label, starting its activity in beginning of 2014, focused on releasing new and exciting music, digitally wise. People can choose how much they want to pay for each release (from nothing to whatever they might think to be fair). 90% of the incoming money, will be given to humanitarian, social, cultural, and activist institutions, 10% of the money will be divided between the people of the label, including label employees and musicians, being a label based not only but also in philanthropic ideas. The label is focused on releasing genres like Free Improvised Music, Contemporary Instrumental Music, Electroacoustic Music, Intelligent Dance Music and Ambient Music.

Austrian composer, performer, improviser, media artist and composition teacher. He studied composition in Vienna with Friedrich Cerha and completed his studies in musicology with a doctoral thesis on Anton Webern. As a double bassist, he played in chamber ensembles and experimental jazz bands.
Essl was composer-in-residence at the Darmstadt Summer School (1990-94) and at IRCAM in Paris (1991-93). Between 1995-2006 he taught Algorithmic Composition at the Bruckner University in Linz. Since 2007, he has been professor of composition and electro-acoustic music at the University of Music and Performing Arts in Vienna.
His work with computers and a long-term preoccupation with the poetics of serial music have been formative influences on his compositional thinking. During the 1990s he carried out various projects for the Internet and became increasingly involved with improvisation. In 1997, Karlheinz Essl was a featured composer at the Salzburg Festival. His compositions are now played all over the world.
Besides writing instrumental music, Karlheinz Essl also works in the areas of electronic music, interactive real-time compositions and sound installations. He develops software environments for algorithmic composition and live electronics. As a performer and improviser, he plays his own computer-based real-time composition environment m@ze°2 and also instruments such as electric guitar, toy piano and music box.

Martin Mallaun studied zither and botany in Innsbruck. Currently he works as a freelance musician and botanist and as a music teacher. He addresses a wide spectrum of musical genres – “whether dealing with improvisation, electronics, baroque lute music, alpine folk music or contemporary new music, the native Tyrolean is always looking for new tonal and stylistic forms of expression with the zither. In doing so, he strolls unperturbed along the edges of the aesthetic intersections of various musical genres” (Music Information Center Austria, www.mica.at).
For his solo debut, “zwischen steinen”, Martin Mallaun was awarded the “Pasticcio-Preis” by the radio station Ö1. For 2012/2013, he holds a scholarship from the Austrian Foreign Ministry’s NASOM (New Austrian Sound of Music) programme.
He gives concerts in countless countries from France to Israel and as far as Japan, and has been guest artist at international festivals (including the Edinburgh International Festival/United Kingdom, the Munich Biennale in Germany and the Klangspuren in Austria). In addition, he is a member of the research project GLORIA, which investigates the effects of climate change on the vegetation of the Alpine ecological systems (www.gloria.ac.at).

Dumps, waysides, industrial waste lands — lush vegetation issues forth everywhere in the wake of human retreat. Plants come in with the wind, with the birds, creep out of the earth itself. The emerging landscape is haphazard, rich in species, in constant flux. Spontaneous structures come and go. Planning is not necessary for this unfolding of events, the protagonists themselves determine the outcome.
ruderals [wild vegetation] is a product of the first musical encounter between two singular musicians — Karlheinz Essl, prominent exponent of the European improvisational scene, with his self-developed computer instrument m@ze°2, and Martin Mallaun, eminent sound researcher and innovator on the zither, a traditional instrument of the Alps. Far from the well-trodden paths of computer and zither "music" they break new ground, gaining unaccustomed musical perspectives, yielding a surprisingly rich world of sounds.

Alex Rita and Errol from Touching Bass feature in our special London edition of the Bandcamp Weekly.